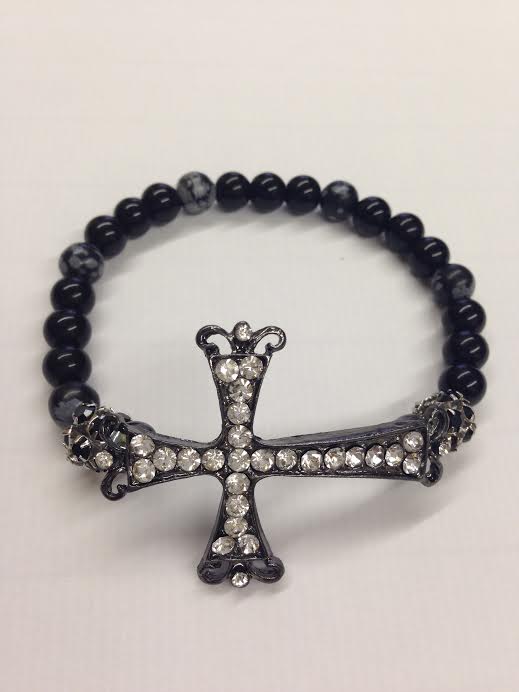 SKU:
$25.00
$25.00
Unavailable
per item
The Four Directions Centered - Surrounded by Snowflake Obsidian & Black Onyx gemstones. - Intended to help the wearer find clarity in their decision making.
The Four Directions (Cross) - has since prehistoric times been employed in almost every culture throughout the world and all the roughly similar shapes of cross symbols have wildly different meanings. the cross variously symbolized health, fertility, life, immortality, the union of heaven and earth, spirit and matter, the sun, the stars... it is seen a world centre and a cosmic axis, the cross represents the human form, with its four cardinal points it can be mapped to fourfold systems: the four directions: north, south, east, and west; the 4 seasons; the four elements; the four winds...
Snowflake Obsidian is a stone of purity. It balances mind body and spirit. Placed on the sacral hara chakra, snowflake obsidian will calm and soothe and allow you to view unhealthy patterns in your own behaviour, thus opening the door to change. Obsidian draws hidden imbalances to the surface and releases them. The blackness of this stone enhances the ability to reach your inner self. It is one of the earliest known stones to be used for scrying (seeing into the future).
Onyx is known to separate. It can help release negative emotions such as sorrow and grief. It is used to end unhappy or bothersome relationships. Onyx guards against negativity, Onyx jewelry is worn to defend against negativity that is directed at you. Black stones have protective energies in the sense that black is the absence of light, and therefore, can be used to create invisibility.
Please allow 3-5 Business days to produce.
Add to Cart